In the afternoon of May 31, 2019 in Hue, HGT organized the Annual GSM 2019 to announce the business performance in 2018 and the plan for 2019 to the shareholders of the Company.

Attending the meeting include:

– Mr. Johnny Fu – BOM Member,  General Director of Huong Giang Tourist Company and other members of the BOM, BOS and BOD of the Company and representatives of businesses, guests and shareholders of HGT.

At the meeting, Mr Ho Van Toai – on behalf of the Board of Shareholders’ Examination, he reported results before the Congress. Accordingly:

– Total qualified shareholders who are convened to attend the meeting according to the list of Asia Pacific Securities Joint Stock Company finalized on 3 May 2019 as 204 shareholders.

According to clause 1, Article 18 of the Charter of HGT: “GSM shall be conducted only when the number of attending shareholders represents at least 51% of the voting shares.” Thus, The Annual of GSM 2019 of HGT  is eligible to proceed.

+ Board of chair of the meeting includes:

–  Mr. Yukio Takahashi – Chairman of the Board

+ Secretary of the Meeting includes:

In the report of the Board of Directors Mr. Le Ba Giang – BOM Member, Deputy General Director  summarized the highlights of HGT activities in 2018.

The Meeting also listened to Mr. Le Ba Giang presenting Statement No. 1: Audit report for 2018 and the plan for 2019;

According to Mr. Le Ba Giang, Based on the general business strategy of the Board of Management, business results of 2018 and business capacity of each unit, the Board of Directors of the Company has developed the general plan for the company as follows: Net revenue: 94,380 million dong, profit after tax: 7,231 million dong.

He also presented the status of implementation of projects of the Company and concluded that: Actively work with competent agencies to complete legal procedures and implement
projects on schedule. Complete the investment plan at 11 Le Loi (Festival Restaurant). Persistently seek appropriate solutions to liquidate the Saigon Morin hotel joint venture contract to renovate and organize business.

He also stressed about take care of employees’ life; improve employees’ welfare on the basis of improving labor productivity and business efficiency. 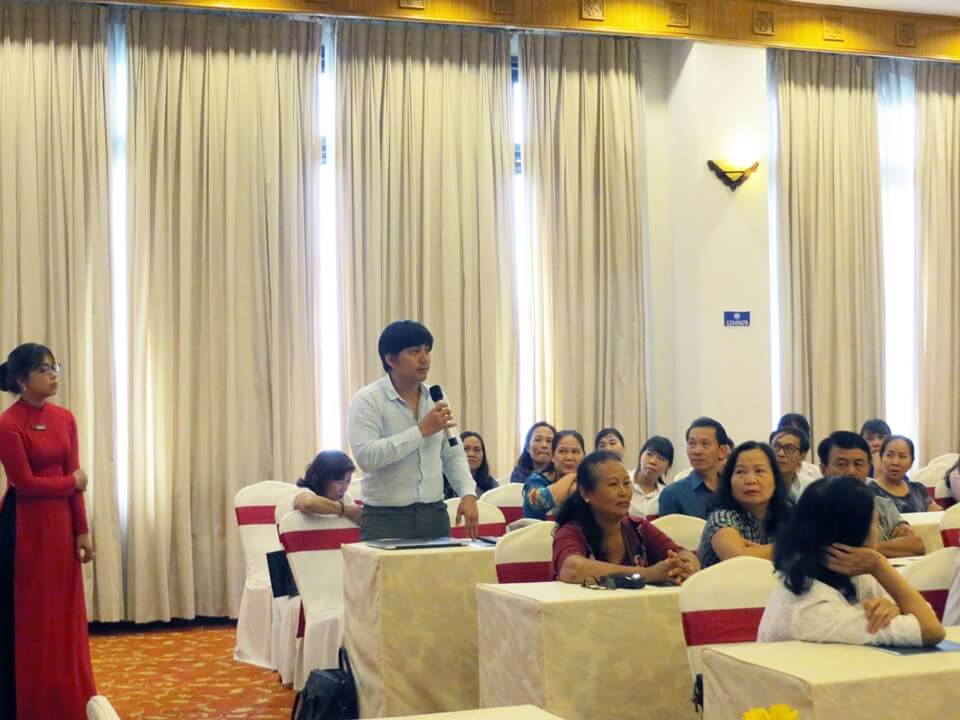 Shareholders are discussing the contents of the Meeting

Mr. Le Ba Giang spoke at the congress to through the board of vote counting and voting

The Meeting agreed to approve the Content of the Minutes and Resolution of the Annual GSM of the Company in 2019.

The Annual General shareholder Meeting of Huong Giang Company in 2019 (fiscal year 2018) has been carried out in accordance with the procedures prescribed by the Enterprise Law and the Company’s charter. The meeting has completed the content program set out.

The Board of Chair of the meeting sincerely thanks the shareholders who have encouraged and shared the difficulties of the Company over the past time. Now, I would like to announce the closing of the Annual General shareholder Meeting of Huong Giang Company in 2019 (the fiscal year 2018).

Wishing you and your family good health, happiness and success.

Since April 25, the Da Nang – Hue route with more air transport is a great alternative to road vehicles. From Da Nang to Hue […]

THE 5 MOST INTRIGUING COLONIAL FRENCH BUILDINGS IN HUE

Hue is most renowned as the former imperial capital of Vietnam where the Nguyen Emperors ruled from the Palace of Supreme Harmony. The Nguyen’s stately […]

The first historical monument of Vietnam was digitized 3D by Google

Tu Duc Tomb in Vietnam is on the list of famous monuments introduced by Google to the whole world. Celebrating World Heritage Day (April […]